A long time ago I was a huge WWF/WWE fan and The Rock was doing his thing, making smells, cooking and what have you. I now follow him on Instagram, you should too, here – he’s a big hoot of a bear, and saw that he was making San Andreas, an epic disaster movie about the fault line, a while back. Now the trailers have hit the TV screens for the movie’s release on May 29th and I’m seriously looking forward to having my nightmares played out on the screen.

You see, I have a thing for end of the world films, the more terrifying, the better. I think it’s because I’m a catastrophiser – I definitely have to write a post on that – and so I imagine the worst-case scenario in most things. It doesn’t help fears or my extreme phobia of the dentist. I’m surprised I’m not a really gloomy person (I’m a ray of effing sunshine!) but it seems that seeing total annihilation on the screen makes me feel better – whatever thing I’m worrying about isn’t as bad as the end of humankind/mass destruction etc. It’s simple logic really. There’s nothing I like more than seeing an apocalyptic film on one of the movie channels at night so I can fall asleep soundly. Weird I know, but the super weird dreams are slightly less weird when I do.

So here goes… not in any order of preference, a list of some of the best – in my very humble, very biased opinion:

Independence Day – global alien domination and America saves the day with a computer virus. Plus this brilliant dog –> 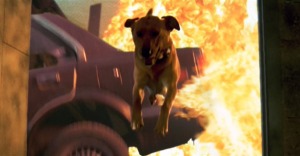 Cloverfield – the marketing in the run up to this had me fascinated and hooked. One of my favourite cities in the world being totally trashed, loved the handicam “found footage” style and they didn’t show the monster too early (a pet peeve, where’s the suspense?!) I want a Cloverfield 2 already – never going to happen.

Deep Impact – the tsunami scene on the beach always makes me cry. Much more human than Armageddon, always preferred it.

Terminator films – mainly Judgement Day & Salvation – Linda Hamilton is beyond kick ass in T2. The beginning and dream sequences are truly chilling. Salvation was awesome in my eyes, Bale was the perfect John Connor, the bleak Californian landscape was spot on.

I am Legend – killer vampire zombies. I’ll admit I cried when *spoiler* the dog gets sick. I usually stop watching five minutes before so I don’t get upset. Mature, I know.

Reign of Fire – Bale, McConaughey and Butler in a destroyed Britain. AND DRAGONS.

Doomsday – another UK based one (why should America have all the destruction?) with a quarantined Scotland and scary cannibalistic marauders. Love the lower budget feel of it. Plus the lead role is female with a glass eye.

The Day After Tomorrow – climate change goes postal on the planet and everyone goes to live in Mexico. Sort of.

2012 – The Neutrinos are mutating!!!! Total nonsense but brilliant fun

Zombieland – The super awesome cast, Bill Murray is beyond brilliant, and a quest for Twinkies. I totally would adhere to the rules too. Makes sense, no?

Dawn of the Dead – Romero’s original is grand and all, but I prefer the 2004 remake. Zombie baby and the question of surviving in a shopping mall. Yep, I could do it.

Wall-E – the cutest apocalypse film ever. A world full of rubbish and humanity on the brink of turning into jelly blobs in space. That’s scary.

Pacific Rim – Monsters from another dimension, super bots and Charlie Hunnam topless… Sorry, I got distracted there…

War of the Worlds – Alien machines that suck your insides dry. I remember seeing this at the cinema. At the end Joe’s hand was covered in half moons from my nails digging in.

There you have it – my choices. I’m sure I’ve missed a bajillion others, I’m sure you’re right. Let me know what you would have included in the comments!