I’d barely looked up from my iPad, watching a Storyville documentary on an FBI informant whilst on the Eurostar, headphones on loud to drown out the rowdy lot sat ahead of us (they were on shots as the train departed at 8:04 a-fricking-m) and hadn’t realised we’d pulled in to Brussels’ Gare du Midi. It’s an underwhelming welcome to the city, but similar to the industrialised and graffitied entrance to Paris’ Gate du Nord.

The station is a little disorienting. With the increased security due to the Paris attacks, the multiple exits from the Eurostar platforms were blocked. Therefore we may have missed the informative illuminated signs that direct you to the Metro (yeah, right!) but instead found ourselves following a warren of paths to finally see the Metro signs and then see them disappear once we had turned the corner – personal pet peeve: signs that direct you and then disappear – what’s with that?!

We found the Metro hub and bought single journeys for €2.10 each as we knew we’d be walking most of the day instead of taking the metro. They have these odd validator things that eat your ticket, open the door then spit them out again – but don’t forget to wait for your ticket before walking through!! We could take line 3 or 4 (which is like a tram) to De Brouckere and then would have to change for Gare Central – slightly tricky as the signs for lines 1 or 5 disappeared. Again. All was well in the end as we realised we had to exit and re-enter sort of.

It was just a slight shock to see Army guys with ginormous guns on the metro – can you imagine the scene seeing them at Waterloo or something?! I thought I’d be fine seeing armed police or army guys on the streets, “…it’ll be perfectly safe…” I would say – yes but it’s actually quite unnatural and not being used to seeing my bobbies with automatic assault rifles hanging about their person, it’s disconcerting.

Our hotel was a mere hop, skip and a jump from the Metro exit on Rue de Colonies/Kolonienstraat and looked warm and welcoming. We were far too early to check in but could leave our bags as we went off to explore the city. With rumbling tummies we set off downhill towards the Grand Place/Gros Markt.

The architecture in Brussels is completely different to anything I’ve seen before. I like its simplicity and it recalls all the old-fashioned chocolate box scenes of winter time and Christmas. The Grand Place is particularly pretty though due to the ornate spires of the town hall and the gilded accents on all the buildings within the square. The square had been prepped for Christmas with a beautiful nativity scene – with real sheep! – and a simply decorated Christmas tree. Walking around we spotted the famous swan and espied an open fire within a restaurant serving moules-frites. Walking in to La Chaloupe d’Or we were warmly welcomed and sat ourselves near the fire. As was befitting our location, we opted for a large pot of moules and frites to share. So good. SO GOOD! A walk was needed afterwards so we decided to explore the rest of the old city, taking in the sights of the Christmas market ensconced around the Bours area. Personally, I feel once you have seen one Christmas market, you’ve seen them all. I didn’t think there was anything particularly special or Brussels specific to this one. There are always the same types of things being sold and I’m glad we didn’t just go for the market. Maybe it’s just me being bah humbug-y! However I do love the smells of roasting chestnuts and cinnamon spices and started to relax and singalong to the Christmas tunes playing over the speakers. Off we strolled to see some more sights within the old town walls, like the Manneken Pis.

The little boy peeing fountain is worth a minute of your time – maybe two if he’s wearing one of his many costumes – but I didn’t think it much of it!

The windows at many of the biscuit and chocolate shops were filled with delicious goodies, especially those in Maison Dondoy. This famous biscuit shop specialise in one of my ultimate weaknesses – speculoos biscuits. I’d recommend a stroll through the Galleries Royales. They’re filled with chocolate shops and cafes as well as cute artisanal stores filled with lace and trinkets.

Our hotel was just up the hill and around the corner from the cathedral. For me, it didn’t have the connection with a higher power that I get from places like Sacre-Coeur, St Peter’s or Lincoln, but it was lovely especially with all the nativity scenes from the different communities within Brussels. It’s used for big state occasions like weddings and funerals and the Pope visited too.
Our room at 9 Hotel Centraal was lovely. I rather liked the exposed brick on the wall and the heeeuge mirror opposite. It was slightly weird having no nets to protect our privacy though. Especially with office workers just opposite! 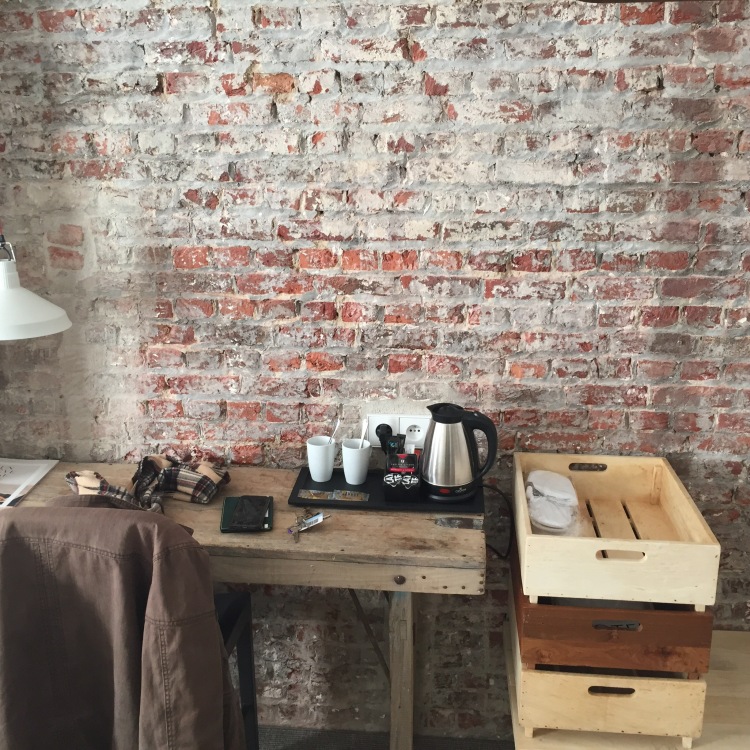 I had sort of forgotten about the bad guys in the news recently until we headed up to our hotel room. Looking out the window I saw a police car with armed police stop a car with three men inside. I could see the driver place his hands on the steering wheel, the front passenger place his on the dashboard and the back passenger on the head rest in front. After a lengthy conversation involving documents and papers being handed back and forth, the police gave the all clear.

Here’s where the story would end normally. But these guys were a bit miffed at having been stopped. So they got out of the car and approached the police TO HAVE A GO AT THEM!! Maybe I’m a born follower, or just British, but there is no way in hell I’d approach police with massive guns and give them what for! To be fair though, I’ve never been profiled due to my race, potential religion or skin colour and speak from a position of privilege. I guess I’d be pretty peeved too.

After a very quick cat nap we decided to make the best of the winter sunshine and headed to the Royal Palace and Mont des Arts area for some pictures and then headed in search for more sustenance (hot chocolate and waffles!)


We had passed by Falstaff earlier and thought it looked like a lovely stop off for some sweet treats. The interior is so pretty – art nouveau details in the window arches and glass ceilings and I wish I had a pair of glasses that could look through into the past to see it in its heyday. The food was fine and generous, but the atmosphere in such a visually rich place was a bit of a let down. It lacked the warmth and friendliness of my beloved Chaloupe and we left quickly after scoffing our waffles.

A little more strolling and shopping around (killed a few hours more and I started to relax into the Brussels vibe…and just like that, it would go weird. It’s the strangest little place and I think it likes being that way! In London, you might see a person begging with a dog beside them. In Brussels, you see them with bunnies. Yes, rabbits. Complete with hay and sticks of celery and carrots. One of the men got moved along by a huge contingent of army guys and just let his bunny wander in to the road and hide under the army truck. Much to my distress. Hubby dragged me away before I had a full on flap and made a scene of myself.

By this point, my tummy was calling for attention so we headed back to Grand Place for some dinner and were treated to the town hall lit up beautifully.

Sporting full bellies we meandered our way back to the hotel, grateful to rest our weary heads after a l o o o o n g day. I was gutted to not have the energy to join the loud party in the bar next to the hotel, it sounded fun, but I needed my rest for the next day and the trip to Bruges! Coming up in part two – In Bruges.